The GAP is built on the abandoned Western Maryland Railroad (WMRR) right-of-way.  The section of the WMRR between Cumberland, MD and Connellsville, PA was built between 1910 and  1912. It operated until 1975.  The bridges and tunnels that were designed to move freight between Pittsburgh and Cumberland were all built in this short span of 2 years – between 1910 and 1912!  This was an amazing industrial feat, considering the rough terrain and numerous river crossings that were required.  Most of the original bridges are still in use by the trail,  they were re-decked to better accommodate bike and foot traffic.

Your journey along the Great Allegheny Passage trail begins at the southern terminus of the GAP trail at Cumberland, and travels north and west towards Pittsburgh, PA.  Both the current mile markers of the GAP trail and the historical mile posts of the Western Maryland Railroad increase in mileage going in the westerly direction. Cumberland, MD thus is  MM 0.   The Western Maryland Railroad (WMRR) used mile posts that denoted miles from Baltimore, and this naming convention carried through to the naming of the bridges on the railroad. That’s why you’ll see that the mile post indicators for all these historic bridges follows this convention: WMRR B MM#, for example:  WMRR B 32.0, or Western Maryland Railroad Baltimore 32.0 miles from Baltimore.

While riding the GAP you will cross the 21 bridges listed here plus another 9 small wooden trestle bridges, for a total of 30 bridges on your journey. 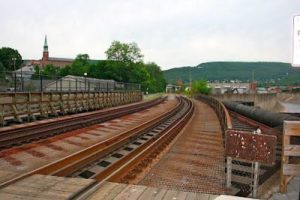 Believed to have been built in 1911, this is a Deck Plate Girder bridge.  Today it carries the Western Maryland Scenic Railroad and the Great Allegheny Passage, this configuration is known as “rail with trail”.  The bridge is approximately 110 feet long. This image is looking east towards Frostburg, MD and away from the Cumberland trailhead where the GAP trail begins.

The US 40 Overpass Bridge, near Cumberland, MD Built in 1910, it is a steel Baltimore Through Truss bridge, which crosses over the National Road (US 40) in the Narrows near Cumberland, MD.  It is also a “rail with trail” scenario at this time.  The structure consists of  2 spans, each of them 150 feet in length.

Built in 1930 this bridge crosses New Hope Road in Frostburg near the turntable at Frostburg Railroad.  It is approximately 30 feet in length. Built in 1930, originally the bridge was not here but was instead ‘tunneled’ out of the rock in order to allow vehicle passage, it is 25 feet in length.  This road is also known as Mount Savage Road. This is just east of the depot in Frostburg, don’t blink you will miss it. Built in 1911 crosses Flaugherty Creek, CSX mainline and a local road,  it is a Polygonal Warren Through Truss with sub-panels. The main span is 240 feet, the entire structure is 909 feet in length.  The bridge was built with a wide width so as to handle two sets of tracks, but it never did.  Located in Somerset County, Pennsylvania. Built in 1871, this bridge has the most fascinating history of any of the bridges along the GAP.  It was originally built for the B & O Railroad’s mainline to cross Will’s Creek outside of Cumberland.  When it could no longer handle the heavier locomotives it was then moved to a location just north of Meyersdale, to carry auto traffic across the B & O Railroad.  It was moved a second time and relocated to its current location and reconstructed in 2007 and now carries the trail over Scratch Hill Road.    It is 81 feet (25 m) long and 13 feet (4.0 m) wide.
It is a Warren Truss bridge, one of 2 remaining cast iron truss bridges in the US, it was placed on the National Register of Historic places in 1978. This is the grandaddy of bridges on the GAP, the first train crossed it in 1912, built by McClintic-Marshall Company of Pittsburgh, Pennsylvania (later became part of Bethlehem Steel.  It is a Deck Plate Girder bridge/ Massive Steel Trestle that stretches 1,908 feet across the Casselman River Valley that includes farmland, CSX Railroad tracks and state Route 219, it is 101 feet off the valley floor.  It was redecked for the trail in 1998.  It is closer to Meyersdale (two miles) than the town of Salisbury. Built in 1911 is a Deck Plate Girder bridge crossing the Casselman River.  It is 242 feet long and about 30 feet above the water level.   It looks nearly identical to the Pinkerton High Bridge, just a tad shorter.  WMRR B217.4 This is the approach to the east side of the Pinkerton Tunnel across the high bridge.  In the background the new “cut” that was performed by CSX to daylight their tunnel as part of the “National Gateway Project”. Built in 1911, this is a 302 feet long Deck Plate Girder bridge spanning the Casselman River.  The unique feature of this bridge is that it was built on a three-degree curve. It was redecked for the trail in 2001.

Built in 1911, this is a Deck Plate Girder bridge over the Casselman River just outside of Confluence, PA.  It is approximatley 400 feet long.

This is new highway bridge that crosses the tailwaters of the Youghiogheny Dam.  Nothing special, but you do have a nice view of an elevated original historic railroad bridge just downstream. Although not an original bridge, this structure (IMHO) is the coolest structure on the trail.  It is located in Ohiopyle and crosses the Youghiogheny River.  It sits on the original piers that held the Western Maryland Railroad bridge for more than 100 years.   From this vantage point you are looking downstream towards the Ohiopyle Falls.   The bridge is about 250 yards above the Ohiopyle falls

The design is a 7 span Modern Bowstring Pony Truss bridge.

The bridge was built during the summer of 1999 and placed into service in the summer of 2000.  Construction of the bridge was quite tricky due to constraints of the site, endangered plants, wetlands etc.  The epic drought of 1999 was actually quite fortutious for this project.  The large crane that lived in the river most of the summer was literally pulled out of the river the day before a high water “event”. Completed in 1912, this is a Deck Plate Girder bridge which is 663 feet long and approximately 115 feet above the Youghiogheny River. Due to the great view of Railroad Rapid, and the sweeping views downstream, pictures taken from this bridge are some of the most common images that you will see from the GAP.  Located on the north side of Ferncliff Peninsula, to whitewater boaters, this bridge signifies the end of the famous “Loop” section of the Youghiogheny. Built in 1916 by Bethlehem Steel, this is a Plate Girder and Warren Through-Truss bridge.  This bridge is 731.5 feet long and goes over the  Pennsylvania Southwest Pennsylvania Railroad. 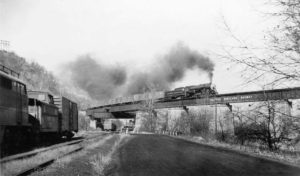 Built in 1912 this Deck Plate Girder, this bridge did triple duty crossing Dunbar Creek, a road and the Pennsylvania Railroad (PRR).  The bridge was built on a third degree curve and is 731 feet long.  This great historical picture shows a 2-10-0 Decapod engine crossing the bridge heading east, upstream on the Youghiogheny.

Road bridge in McKeesport that crosses the Youghiogheny River. It is  1228 feet in total length, the single largest span is 312 feet.  Kinda a regular ol’ ugly highway bridge, so we are going to skip a picture of it. Built in 1891 by the by the Pencoyd Bridge and Construction Company, it is a 12 Panel Pin-Connected Parker Through Truss bridge. There are Deck Truss approach spans as well as Deck Plate Girder approach spans.  It crosses the  Monongahela River in McKeesport. Originally built for the Pennsylvania Union Railroad, the bridge connected the U.S. Steel Duquesne Works and the National Tube Works.  The full structure is 1,570 feet long, the single largest span is 340 feet, it is 49 feet above the average pool elevation of the river. 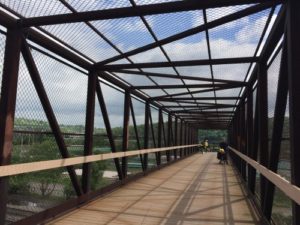 Built in 2010 and the near twin of the Whitaker Flyover.  A 110-foot-long, 37-ton bridge in the RIDC industrial park in Duquesne crosses three sets of Norfolk Southern tracks.  The two miles of trail between the 2 flyover brigdes is built on the U.S. Steel’s former coke gas pipeline. Built in 2010, this bridge was built off site and then lifted into place.  It is 170-foot-long and weighs 62-tons, it crosses six sets of tracks operated by Norfolk Southern Railway and Union Railroad Co.

Built in 1900 for the Monongahela Connecting Railroad, it is a Metal 16 Panel Pin-Connected Pennsylvania Through Truss, with approach spans that are Metal Deck Girder. The entire structure is  1117 feet in total length with the longest span being 321 feet, there are 6 spans, it is approximately 48 feet above the river.  The bridge crosses the Monongahela River and is actually one of 2 bridges built on a single set of piers.  The Great Allegheny Passage utilizes the downstream ( northern) bridge and the southern span carries Hot Metal Street.

The Hot Metal bridge was constructed for ladle transfer cars  carrying crucibles of molten iron from the blast furnaces of the J&L Steel Mill, to the open hearth furnaces on the opposite bank to be converted to steel.  During World War II 15% of America’s steel making capacity crossed over the Hot Metal Bridge, up to 180 tons per hour.

The Great Allegheny Passage offers views of the incredible diversity in boats found all along the trail. You’ll thrill to see whitewater kayaks and rafts navigating rushing whitewater rapids of the Youghiogheny River, to enormous coal towboats traveling the serene wide stretches of Monogahela River outside Pittsburgh. 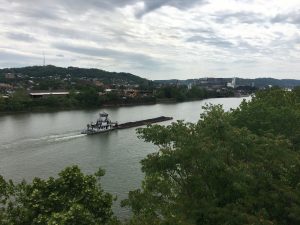 For lots more information on the famous Great Allegheny Passage, check out the GAP trail blog.

To experience this amazing rail trail, join us on one of our bike tours along the Great Allegheny Passage.  Choose from a 3 day Easy Rider tour, a 4 day GAP tour or a 6 day GAP and C&O Canal tour that bikes every mile from Pittsburgh to Washington DC.