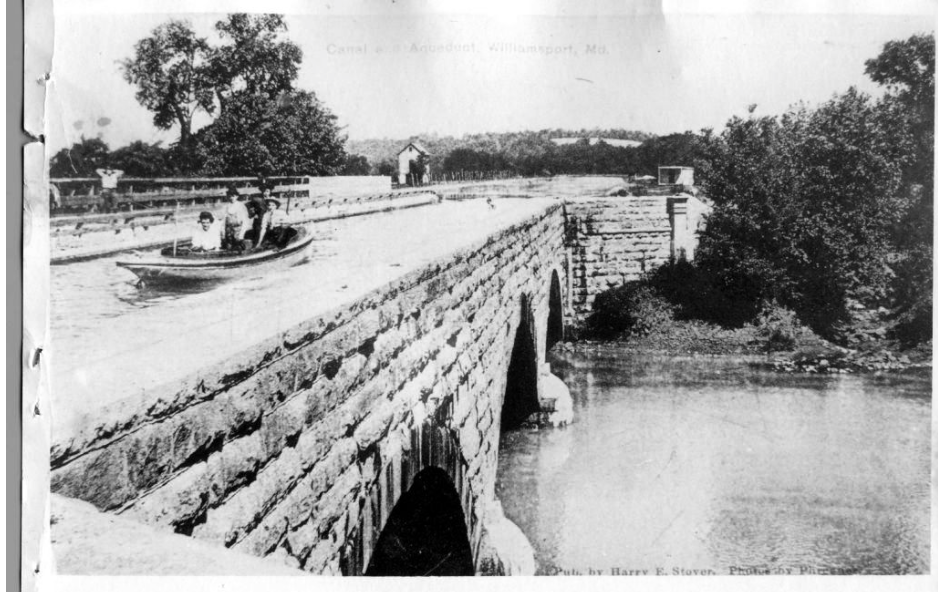 Starting in the heart of Washington, DC, the Chesapeake and Ohio Canal (C&O Canal) towpath leads cyclists on a 184.5-mile journey all the way to Pittsburgh, PA. While the C&O Canal was originally conceived as a transportation system from DC to Pittsburgh, through the Ohio River Valley, it stands today as one of America’s most amazing national parks as a wonderful, scenic, car-free walking & bicycling towpath.  You can bike a short section of the towpath or the entire connected system of the C&O Canal Towpath and the Great Allegheny Passage. (It makes an awesome 6 day inn-to-inn bike tour.)

Deep Roots of the C&O Canal From boats to bicycles

The total length of the canal is 184.5 miles (300 km). The elevation change of 605 ft (185 m) was accommodated with 74 canal locks. To enable the canal to cross relatively small streams, over 150 culverts were built. The crossing of major streams required the construction of 11 aqueducts (10 of which remain). The canal also extends through the 3120-ft (950 m) Paw Paw Tunnel.

The C&O Company was chartered in 1825 to construct a shipping canal connecting tidewater on the Potomac River in DC with the headwaters of the Ohio River in western Pennsylvania. When completed, it would provide an economical trade route between the eastern seaboard and the trans-Allegheny West. In 1850, the canal reached Cumberland, Maryland, located at the edge of the Allegheny Front, a daunting 1000-foot escarpment. Unfortunately for the canal, it was eight years behind the B&O Railroad. While the B&O held the competitive edge over the canal almost from the beginning, there was a brief golden period for the canal. During the years following the Civil War, the coal trade increased rapidly until in 1871, the peak year, some 850,000 tons were carried down the canal. During these few profitable years, more than 500 boats were in frequent operation on the canal.

Canal boats served as a business, a home and a barn for the mules. The living space for boat crews or families was small, barely 12 feet by 12 feet. Each week, the boat and crew would travel 184.5 miles, heading east or west, to load or unload, and then back again. A round trip consisted of more than 360 miles and boat crews were fortunate to earn $15 per trip, or about five cents per mile, for their efforts.

The C&O Canal, throughout its entire length, is within 100 yards of the Potomac River, which was great for water supply, but it was continually plagued by spring floods. Operations ceased in 1924 after another flood damaged the canal.

In 1938, the U.S. government purchased the right of way of the 184.5-mile long canal. The government hoped to restore it as a natural recreational area. However, World War II restrictions halted the project after only 22 miles of the canal had been repaired and re-watered.

One Judge and Public Opinion Saves the Day

Following WW II, the federal government decided that the canal should be turned into a parkway–a paved roadway connecting DC to Pittsburgh. Fortunately, U.S. Supreme Court Justice William O. Douglas, an avid outdoorsman and early environmentalist, saved the C&O Canal. Justice Douglas felt that the long-neglected canal, like the river, was rich in beauty, history, wildlife, and recreational opportunities. In March 1954, as part of a public challenge to the editors of the Washington Post, which published an endorsement of the parkway, Douglas led an eight-day thru-hike of the towpath from Cumberland to DC. Although 58 people participated in one part of the hike or another, only nine men, including Douglas, hiked the full 184.5 miles (297 km). Popular response to and press coverage of his actions turned the tide against the parkway idea. However, it wasn’t until January 8, 1971, that the canal was designated a National Historical Park. It is the only national park dedicated to the memory of one person: Justice William O. Douglas. We wholeheartedly agree with his opinion of the C&O Canal Towpath:

“The stretch of 185 miles of country from Washington, DC, to Cumberland, MD, is one of the most fascinating and picturesque in the Nation… it is a refuge, a place of retreat, a long stretch of quiet and peace… a wilderness area where we can commune with God and nature, a place not yet marred by the roar of wheels and the sound of horns.”

Modern Destination and Path into the Past Pedaling into the past.

Today, the C&O Canal National Historical Park includes nearly 20,000 acres (80 km²) and receives over 3 million recorded visits each year. The major use of the park is cycling on the towpath. Close to Washington, DC, the towpath serves bike commuters en masse. Once beyond the beltway, the fervor of Washington fades and you will feel as if you are cycling along in the early 1900s. Bicyclists traversing the entire length of the canal are a much more common sight nowadays than mules pulling barges, especially since the majority of the canal lacks water.
Experience the amazing C&O Canal Towpath for yourself on one of two Wilderness Voyageurs’ biking tours: a 3-day highlight tour called our Easy Rider Tour that travels the Great Allegheny Passage trail from Ohiopyle, PA to the C&O Canal Towpath from Cumberland MD to DC, or a 6-day tour Great Allegheny Passage and C&O Canal Towpath tour that travels from Pittsburgh, PA all the way to DC.  These are actually our most popular rails-to-trails bike tours!