Birding on the Chesapeake Bay

Birding on the Chesapeake Bay Of the creatures that populate the Free State, its most well known is probably the the famous blue crab. But many other species call this watershed home. The Chesapeake Bay provides food, water, cover and nesting areas to over 3,000 migratory and resident wildlife species. Of those, over 442 species of bird pass through Maryland or reside within its borders. The peninsulas of the Chesapeake Bay are home to vast flocks of waterfowl, wading birds and shorebirds, along with many nesting Bald Eagles. Maryland’s Chesapeake Bay is a nationally-known birding hotspot! 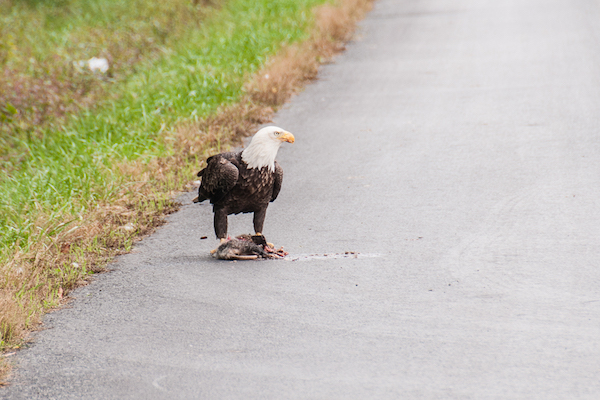 A bald eagle enjoys a roadside snack at the Blackwater Wildlife Refuge.

Waterfowl and other birds migrating along the Atlantic Flyway stop in the Chesapeake Bay, finding food and shelter in coves and marshes. The Chesapeake is the winter home for tundra swans, Canada geese and many ducks including canvasbacks, pintails, scoters, eiders and ruddy ducks. It is also one of the largest nesting areas in the eastern U.S. for the threatened bald eagle, the once-endangered brown pelican, double-crested cormorants, and home to the world’s largest population of another raptor, the osprey, with more than 2,000 nesting pairs. This 28,000-acre refuge on Maryland’s Eastern Shore is most famous among birders for having the highest density of nesting Bald Eagles on the Atlantic Coast north of Florida. Our bike tour, we take a spin through the Blackwater National Wildlife Refuge, taking our time so nobody misses out on any bird sightings! Our ride ends at the visitor center, where you can see more bald eagles and talk with interpreters about the ecosystem.

Blackwater is also renowned for huge flocks of wintering geese, swans, and ducks. The refuge comprises one-third of Maryland’s tidal wetlands, and also has 24 freshwater impoundments that benefit waterbirds. Snow Goose, Canada Goose, Tundra Swan, American Black Duck, Mallard, and Northern Pintail are among the most common species. The wetlands and marsh also host many shorebirds in spring and fall. Guests enjoy the viewing deck at the Blackwater Wildlife Refuge.The Refuge also hosts the largest remaining natural population of Delmarva fox squirrels. These squirrels were listed as an endangered species because of habitat loss from development and timber harvesting. However, after a rigorous recovery plan and range expansion, the U.S. Fish and Wildlife Service took the squirrels off the endangered species list in November 2015.

Pickering Creek Audubon Center, a 400-acre tract on the Eastern Shore, was donated to the Audubon Society in 1984. It operates as a working farm and conservation center. This center is a great example of Maryland’s ecosystem diversity. Pickering Creek comprises hardwood forest, freshwater marsh, brackish marsh, and wetlands. Around 240 species of birds have been recorded here. On our bike tour, we take about an hour to explore Pickering Creek, wander its trails and open our ears to hear birds calling in the trees. 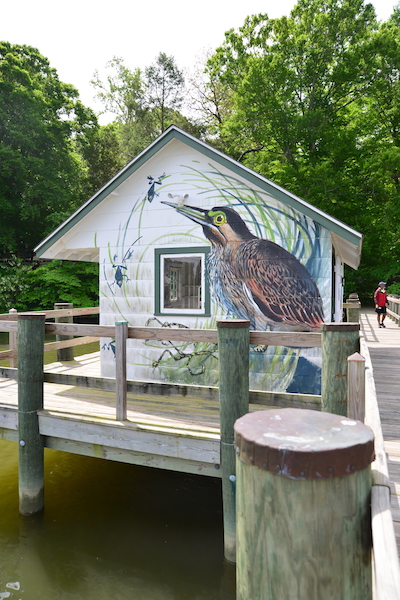 The area has about four miles of trails, which lead to bird blinds and observation platforms overlooking wetlands. From fall through spring the wetlands host Tundra Swan and many species of ducks, while Northern Harrier flies over grasslands. Osprey can be seen from spring to fall; Bald Eagle, all year; and Golden Eagle, occasionally in winter. Spring and fall also bring a dozen or more species of shorebirds.

Birding along the Chesapeake Bay is one of the many enriching experiences on a Wilderness Voyageurs bike tour. We hope that all guests come away with an appreciation of the history, ecology and beauty of every cycling destination.

All Wilderness Voyageurs tours are fully supported with a SAG vehicle and include beautiful routes through stunning landscapes, with excellent food and accommodations, top rate equipment and dedicated and enthusiastic guides.