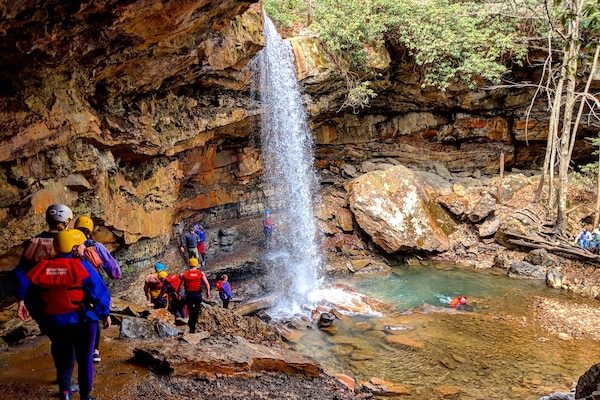 If you’re looking for adventure in Pennsylvania’s Laurel Highlands, look no further than the little town of Ohiopyle. With a tiny year-round population of under 100 people, Ohiopyle is a small town with huge potential for outdoor recreation. The borough of Ohiopyle is surrounded by the 20,000-acre Ohiopyle State Park, the biggest state park in Pennsylvania. 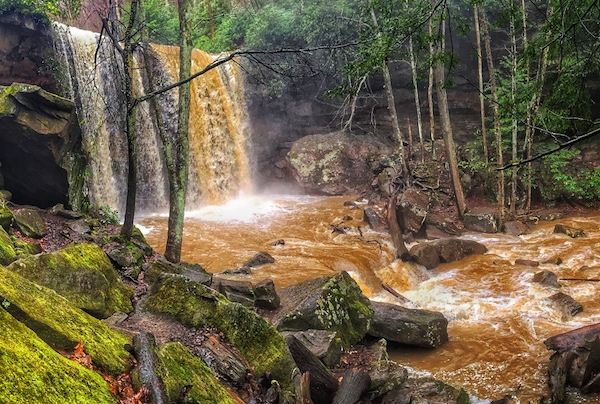 The park has over 70 miles of hiking trails, 30 miles of mountain bike tracks and quality climbing crags sprinkled throughout the rhododendron-lined forest. Ohiopyle is also situated at the southern terminus of the 70-mile Laurel Highlands Hiking Trail, and in the middle of the Great Allegheny Passage, a 150-mile rail-trail that stretches from Pittsburgh, PA to Cumberland, MD. The park’s crowning jewel is the Youghiogheny River, whose clear green-blue waters horseshoe-bend around the center of town, offering world-class kayaking and fly-fishing.

Best things to do in Ohiopyle The waters of the Yough are so intertwined with the town, that Ohiopyle’s name comes from a Native American word meaning “white frothy water.” The Youghiogheny River (Yok-i-gay-nee), or the Yough (Yok) for short, is a 134-mile-long (216 km) tributary of the Monongahela River. It runs north through West Virginia, Maryland, and Pennsylvania. Youghiogheny is an Algonquin word meaning “a stream flowing in a contrary direction.”

Just like the rest of the nation, all of Western Pennsylvania used to be inhabited by First Nations Tribes of North America – namely, the Monongahela people. As European settlers arrived, these native tribes were forced to flee and head further west. The colonial powers of New France and the British Thirteen Colonies fought for control of the trading routes in the Ohio River Valley in what was at the time the northwestern frontier of America.

The French were the first to explore the upper reaches of the Ohio and Mississippi River valleys. They built several forts in the area, including Fort Duquesne at the confluence of the Allegheny and Monongahela Rivers in present-day Pittsburgh.  The colonial governor of Virginia sent young George Washington on a mission to take Fort Duquesne.

Washington tried to use the Youghiogheny River as a means to reach Fort Duquesne quickly, but was forced to abandon the river passage by the waterfalls in the Ohiopyle area. Two battles ensued near the Ohiopyle area, which historians consider to be the opening shots of the French and Indian War.

Ohiopyle was also a major stop on the railroads. In 1871, railroads reached Ohiopyle. The Baltimore and Ohio Railroad and eventually the Western Maryland Railroad had stations in Ohiopyle. At the turn of the century, lumber became a major industry. Narrow gauge railroads snaked around the hills, hauling lumber to the mills in town and the larger railroad lines. A large mill was erected near Ohiopyle Falls. The railroads brought tourists to Ohiopyle in droves. It cost $1 to ride from Pittsburgh to Ohiopyle and back. By the 1880s, there were numerous hotels in the area, and Ferncliff Peninsula had a boardwalk, dance pavilion, bowling alley, walking paths, tennis courts, ball fields, fountains and the Ferncliff Hotel.

When cars became more affordable, train travel to Ohiopyle tapered off. The resort went out of business, its buildings were removed, and the forest grew back. Now the Ferncliff Peninsula is a 100-acre peninsula with hiking trails and a unique habitat for many rare and unusual plants. 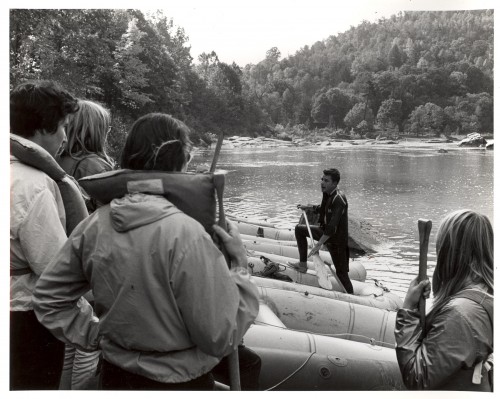 The Martin family (founders of Wilderness Voyageurs) discovered rafting on the Yough in 1963. Lance Martin, 21 years old at the time, his wife Lee and their friend Karl Kruger guided the first passengers down the Youghiogheny River that year. This marked the start of the commercial rafting on the river. At the time, nobody was rafting the river commercially, or even privately!

In 1964, Karl and Lance inflated two Army surplus rafts and guided a few hundred passengers down the river. Their simple brochure invited visitors to “Go Raft the Yough” and Wilderness Voyageurs was born.

The founding of Ohiopyle State Park in the 1960s put the Yough River permanently on the adventure map. Only an hour from Pittsburgh, this scenic state park of forests and rivers quickly became a favorite day trip from that metro area.

In 1966, Wilderness Voyageurs guided Ralph McCarty, his son Mark (then only 12!) and their church group down the Lower Yough. It was the first of what would be many more rafting trips for the McCarty family. Ralph McCarty went on to develop an inflatable kayak and began offering outfitted kayak tours on the Lower Yough in 1969, and Laurel Highlands rafting company was born. The Youghiogheny provided the foundation for nascent rafting company founders to learn about whitewater. Over the course of the next four and a half decades, the number of people running the river below Ohiopyle (on guided trips or renting rafts) increased exponentially: from 5,000 in 1968 to 150,000 in 1982, to more than 250,000 who run the Lower Yough each year today.

Wilderness Voyageurs remains the leader on the river, treating more guests to guided and self guided rafting on the Lower, Upper, and Middle Yough sections every season, than any other rafting company. The second generation family owners of Wilderness Voyageurs, Eric Martin and his sister Lynne, really mean it when they say they grew up on the Youghiogheny river!

Along with its array of outdoor activities, Ohiopyle also hosts lots of fun events throughout the year:

Music in the Mountains (yearly in September)

Weekly Yoga Practice at the Ohiopyle Community Center (Every Tuesday & Thursday from 6:30-8:00)

Wilderness Voyageurs also offers fun monthly and weekly events throughout the summer. Starting in June, we have our ever-popular, free kayak roll clinic every Wednesday evening. We also have a weekly Friday night loop run, where a group will head out on a casual paddle around the “Loop,” the first couple miles of the Lower Yough. Take a raft, a duckie or a kayak! There are special events throughout the summer — speakers and workshops on all sorts of outdoor topics. To cap it all off Falls City Pub hosts live music on Saturday night and Sunday afternoon all summer long, plus monthly tap takeovers and a beer dinner every spring and fall!

To keep up with everything happening in Ohiopyle, check out our adventure calendar.