Bike touring is just as much about experiencing historical places as it is about clocking mileage and elevation gain. Our tours pass through over 90 National Historic Districts nationwide, helping you understand your part in the American story while touring its countryside.

Authorized by the National Historic Preservation Act of 1966, the National Register of Historic Places recognizes and preserves significant buildings, sites, districts and structures to help preserve America’s historic spaces. Keep reading to sample a handful of historic sites we could guide you through on one of our tours. Passing through almost 20 Historic Districts combined, our Easy Rider, Great Allegheny Passage, and Pittsburgh to DC rails to trails bike vacations are some of our most historically jam-packed tours. These routes incorporate unique historical districts from the registry that pass through districts such as Homestead, PA, Cumberland, MD, Shepherdstown, WV, and Frederick, MD.

The tours begin in Pittsburgh and wind through old mining and steel towns that were integral during the Industrial Revolution. This byway acts as a stepping stone to Cumberland, MD, the supposed origin of America’s first highway and the former outpost for George Washington during the French and Indian War. The Civil War and colonial America take center stage in this tour that explores the original English settlement at Jamestown. Williamsburg and Yorktown are among other more well-known historical districts we check off the register’s list on this tour as well as lesser-known Monument Avenue and Chippokes Plantation. Sometimes you may never suspect the rich histories of the quaint towns you speed through on your bike without your guide’s historical interpretations. This tour passes through over 10 Historical Districts, some of which are quite well-known. However, a couple of our unsung favorites include Leesburg and Middleburg. Middleburg was established in 1787 and was a strategic coach stop and relay station during the Revolutionary War. 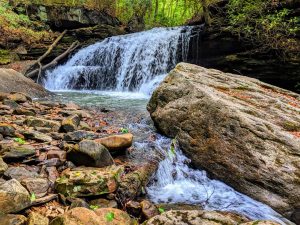 Jonathan Run Falls in the summer.

Rightfully a piece of the Historic Register and a stop on our Finger Lakes road tour, Seneca Falls was the former home to the Cayuga Native American tribe and is a historic location along a branch of the Erie Canal where the women’s rights movement was born. Keep along this route and land in historic Ithaca, an area drenched in both Native American and Revolutionary War history dating back to the mid 1600s. Nestled in the Adirondacks and on this tour’s cue sheet is Ft. Ticonderoga. This 18th-century star fort built by the French at the end of Lake Champlain was of strategic importance during the French and Indian and the Revolutionary Wars thanks to its location at the portage of the La Chute River between Lake Champlain and Lake George. This tour, alone, is a historical sojourn along the canal, but the route passes through officially named historical districts such as Medina and Lockport. The Erie Canal reached Lockport in 1824, and by 1829, it became an established village centered around the locks which enabled travel to continue down the canal. This is the site of the historic “flight of five,” which was later replaced by the larger locks E34 and E35.

Kick Some Pass and Colorado Colors Don’t let the Kick Some Pass and Cycle Colorado Colors bike tours fool you; we never compromise history for views. See both in Leadville, CO, the highest town in the United States with plenty of 14’ers visible from town and countless historic sites relating to the mining boom during the town’s heyday. Also not to be discounted while speeding over passes and mountains are Redstone and Breckenridge Historic Districts. Staff-favorite Wallace Historic District is a stop on this rail to trail tour and a Silver Valley town rich with history in the Coeur d’Alene silver-mining district, which produced more silver than any other district in the U.S. during the mining boom. A well-kept secret, the Mickelson Trail Rail Trail and surrounding Badlands meets where Native American history, American cowboy expeditioning and coal mining collide. Custer, Mt. Rushmore, Mystic, and Rapid City are among some of the Historic Districts highlighted on this biking vacation. The first segment of the Katy Trail opened in Rocheport in 1990 shortly after the Katy operated the final trains from the Historic District of Sedalia to Machens, Missouri. Cycle through both Rocheport and Sedalia to witness the significance of the railroading industry while following the route of the first rail line connecting Texas with other states. New to the schedule in 2019, this tour explores Historic Districts such as La Crosse and Trempealeau, an ancient Native American site with earthwork mounds and believed to have introduced the corn culture to the area. Covering many miles of Michigan trails and Dunes throughout Mackinac Island, these Historic Districts tell stories of early Great Lakes commerce, fur trade, and War of 1812 battles surrounding Ft. Mackinac that can still be toured today. There certainly isn’t a lack of bayside sights and culture on this one, but you will also get to experience a few National Historic Districts along the way. Oxford and St. Michael’s are a couple worth mentioning and both have long histories as strategic port towns on the Chesapeake Bay. Jekyll Island is a stop on this tour and was placed on the National Register of Historic Places in 1972 thanks to its historic genealogy beginning in the 1500s with the Guale Native Americans, continuing with the Spanish, and eventually the English. On this tour, see over five different Historic Places along with the beautiful scenery and wildlife. This tour operates on Washington’s San Juan archipelago in the Puget Sound and travels through over five different sites on the National Registry thanks to its location that caused competing territorial claims between the U.S. and Great Britain after the Oregon Treaty of 1846. Host to both British and American camps, the four main islands act as both a historical and geological gem. Don’t sample so much Bourbon that you aren’t able to remember the rich history rolling through the hills on this Kentucky bike vacation. Among the five stops from the National Register of Historic Places are Keeneland Racetrack (the filming location of movies such as Secretariat and Seabiscuit) and Shaker Village of Pleasant Hill. History still lives on this tour as the sound of horse hooves mix with wheels speeding over pavement through Amish Country in Lancaster, PA. There are over 200 properties and districts listed on the National Register in Lancaster County, including Lititz, Ephrata Cloiser, and Strasburg.

And the rest is history…

Call Wilderness Voyageurs at (800)-272-4141 or visit our website to join us on one of our biking vacations to ride through countless Historic Districts listed on the registry. You aren’t soon to forget the beauty of experiencing the world from your bike saddle.