Bike the best car-free bike path in the Eastern U.S.!

Spanning 150 miles through the Allegheny Mountains, the Great Allegheny Passage Trail is the crown jewel of Mid-Atlantic Rail Trails. So much so, that the national leader on rail-trail authority, the Rails-to-Trails Conservancy, inducted the GAP Trail first on their Rail-Trail Hall of Fame list in 2006!

A Rail-Trail? What’s that? You can almost guess what a rail-trail is from it’s name. It’s a car-free, multi-use path that was converted from old abandoned railway beds.

When the railroad disappears in a town, communities, local trail groups and the RTC (Rails-to-Trails Conservancy) all pull together to raise funds to create, clean and maintain these amazing multi-use trails and connecting corridors.

Because of their past use for the railroads, rail-trails are never too steep making them popular for cyclists, hikers, cross country skiers and runners.

What is The GAP Trail? 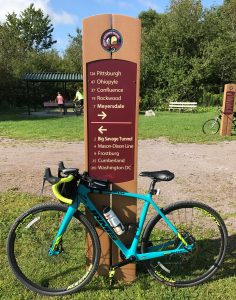 The Great Allegheny Passage, or GAP, Trail is a multi-use, non-motorized trail that spans from Pittsburgh, Pennsylvania to Cumberland, Maryland. This amazing trail follows abandoned railway beds through the Appalachian Mountains, taking cyclists, hikers and runners on a 150 mile journey back through time, to when the steel industry was king.

Touring the GAP Trail by bicycle shouldn’t be a daunting thought! Since the trail was constructed for railroad use, the trail is never too steep and averages less than a 1% grade.

That’s what makes the Great Allegheny Passage popular for bike touring! Cyclists can travel through South Western Pennsylvania and Western Maryland, pedaling through and around the mountains, instead of up and over them, enjoying a moderate ride with stunning mountain and valley views along the way.

Don’t believe it? Check out the mileage and elevation profile for the Great Allegheny Passage Trail.

Why is there a bike path through the Appalachian Mountains? landscape. Rail cars hauled valuable coal, minerals and timber from the rich deposits in the mountains, to the popular manufacturing hubs in Baltimore, Cumberland and Pittsburgh.

Where cyclists and runners now pedal and stomp their way over a car-free crushed limestone trail, the Western Maryland (WM) Railroad, Pittsburgh & Lake Erie (P&LE) Railroad and the Baltimore & Ohio (B&O) Railroad once chugged their way over hundreds of miles of track, bringing valuable coal, timber and other minerals to the city of Pittsburgh, and further West.

The Great Allegheny Passage can trace its beginning to June 9, 1978, when the Western Pennsylvania Conservancy purchased the first property that would become the GAP from the Western Maryland Railway Company. This section of the GAP trail was named the Youghiogheny River Trail, and stretched 9.5 miles from Confluence to Ohiopyle. Completed in 1986, most of this section travels through Ohiopyle State Park – one of the largest parks in Pennsylvania at over 19,000 acres!

In 2013 the final section of trail, running from Homestead to Pittsburgh was completed, giving Pennsylvania the honor of ‘most open trails in the Nation’!

Relics of the Industrial past scattered along the trail.

Along the entire 150 miles of the Great Allegheny Passage, you will encounter bridges, tunnels and train stations— relics of the former rail bustle. So, take your time pedaling along the GAP Trail, and discover all the unique history and beautiful scenery that’s sometimes just a stone’s throw off the path. You can begin your Great Allegheny Passage bike tour right on the grounds of the largest labor dispute in U.S. History – the 1892 Homestead Steel Works Labor Strike. The Historic Pump House is still standing, and is the trailhead for the GAP trail.

Winding your way out of Pittsburgh, you will travel over former railroad bridges and trestles as you follow the Monongahela River for nineteen miles. This part of the trail is a bit more urban, and you can spot former steel mill sites along the river banks.

Crossing over the Monongahela River, you will change over to the Youghiogheny River and continue pedaling along it’s winding waters until you reach as far south as Confluence, PA.

Pedal into the countryside as you leave the city behind

As you near the town of Connellsville, 61 miles from Pittsburgh, you will start to see one of the more unique historical markers along the GAP, beehive coke ovens. You can spot these coke ovens hidden all along the hillsides of the trail, but specifically around the town of Connellsville, PA.

Connellsville was once the largest producer of coke in the country, with thousands of these beehive coke ovens lighting up the hillsides. During the coke and coal days, Connellsville had more millionaires per capita than any other place in the country and possibly the world. 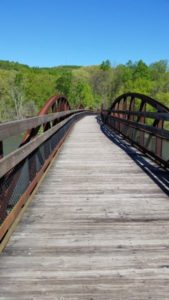 Some of the other highlights you’ll experience along the Great Allegheny Passage, are the historic bridges, trestles and tunnels that were constructed to transport rail cars and their heavy loads. Pedaling along these high bridges and through the low lit tunnels, you can just imagine the incredible engineering and hard work it took to create these impressive structures.

Just upstream from Connellsville, you will pedal right through the small town of Ohiopyle, Pennsylvania. Nowadays, this town is most noted for their hiking and biking trails, and the 14 miles of world class whitewater on the Youghiogheny River, but back in it’s early days this town was a major railroad stop. You can still pedal over two of the incredible bridges that were erected over the river to carry both passenger and freight engines, and watch people rafting the Youghiogheny in Ohiopyle below. Plan to spend some time exploring this outdoor-focused river town.

Pedaling out of Ohiopyle, your next highlight is the Pinkerton Bridges and Tunnel at mile marker 52. Get ready for another high river crossing! You will cross two bridges over the Casselman River with an 849-foot tunnel in between them. Leaving the Casselman River behind you, the next feature you will see is the Salisbury Viaduct. You can’t miss it! Running nearly 2000 feet long, and almost 100 feet high, this was the longest bridge on the railroad. Built in 1912 to cross the Casselman River Valley, it was decommissioned in 1975 and then converted for pedestrian and cycling use as part of the Great Allegheny Passage in 1998.

It’s all downhill from the Eastern Continental Divide 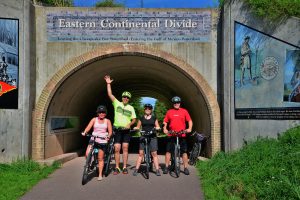 Once you reach the Eastern Continental Divide at mile marker 24, you’ll have a very fast downhill losing nearly 1,800 feet of elevation on your way down to Cumberland. The Eastern Continental Divide is an interesting geological feature. All of the water that falls on the northern side of the divide will eventually make its way to the Gulf of Mexico, while all the water that falls on the southern side will eventually reach the Chesapeake Bay.

A mile and a half after crossing the continental divide, you’ll reach Big Savage Tunnel. This is the longest tunnel on the trail at more than 3,300 feet long! It is lit inside, but portions can be dark. If you have a light, this is where you’ll want to use it!

Exiting the tunnel, it’s a quick 20 downhill miles until you reach mile marker zero in Cumberland, Maryland. Long known as the “Queen City of Maryland”, Cumberland continues to build upon its transportation and industrial heritage.

You can pedal your way right to mile marker zero at Canal Place, where the Great Allegheny Passage meets the C&O Canal Towpath to Washington DC. Canal Place is also where the city’s central business district and pedestrian mall are located, and also houses the C&O Canal Visitor Center and the Western Maryland Railway Station.

If you want to experience the sights, sounds, culture and geography of a place, what better way than from the saddle of a bike?

All Wilderness Voyageurs tours are fully supported with a SAG vehicle and include beautiful routes through stunning landscapes, excellent food and accommodations, top rate equipment, dedicated and enthusiastic guides.