History of the Katy Trail

History of the Katy Trail

Posted at 14:48h in Katy trail by michelle.montgomery 0 Comments
0 Likes

History of the Katy Trail: Turbulent Past, Smooth Present

When the Missouri-Kansas-Texas (MKT) rail line joined forces in 1870, it became the very first rail line connecting the state of Texas with other states. Its inaugural roll into Denison, Texas, on Christmas Day in 1872 launched a decades-long role as a major interstate route for commerce. The MKT was quickly known as “the Katy” by all–its stock also traded as K-T.

MKT symbols to mark the railroad line during its heyday.

The railroad line was created through the acquisition of the Union Pacific Railway, Southern Branch and 5 other small branch lines:

Robber baron Jay Gould (1836-1892) added the Katy to his large and expanding rail empire in 1880. During the Gould era, expansion in Texas was a priority and reaching Houston and San Antonio primary goals. Through the leasing of several railroads throughout Texas, the Katy operated more than 1,100 miles of track in Texas by 1914.

In a what turned out to be a marketing disaster, general passenger agent of the Missouri-Kansas-Texas Railroad William George Crush orchestrated a head-on collision between two Katy locomotives in 1896. Forty thousand people showed up at the future site of Crush, Texas, to witness the spectacle; unfortunately, the exploding locomotives killed 3 people.

The high point of the line’s revenues occurred during World War II.  This prosperity lasted until the mid-1950s when a confluence of events, including the aftermath of a severe Texas drought, brought it to the verge of bankruptcy. The Katy limped along for many years, including a reported net loss in excess of $10 million in 1967. A flyer promoting the line to passengers.

On October 4, 1986, the Katy operated the final trains from Sedalia to Machens, Missouri. On that day, after their passage, floodwater from the Missouri River severely damaged the track along the route. After experiencing many washouts in the past along this line, the railroad decided repairing it was not a worthwhile investment. Trains were re-routed, and the right of way was abandoned. The Missouri Department of Natural Resources purchased the right of way with a donation from Edward D. “Ted” Jones and Pat Jones of Williamsburg and St. Louis. In 1990, the first segment of the trail officially opened in Rocheport. In 1991, the Union Pacific Railroad donated 33 miles (53 km) of right-of-way from Sedalia to Clinton. 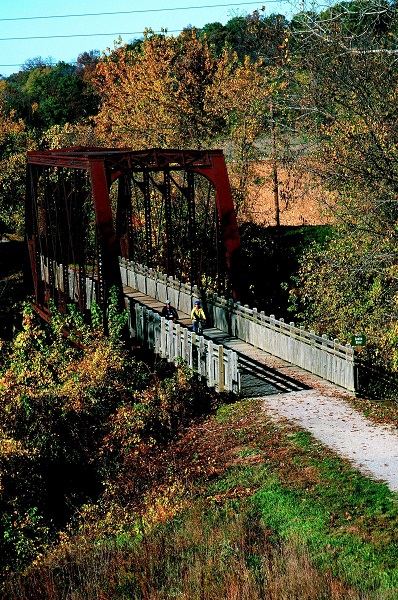 One of the many bridges encountered along the beautiful Katy Trail.

Today, the Katy Trail is the longest rails-to-trails project in the country at 237 miles (386 km). The crushed limestone trail stretches across most of the state of Missouri. Over half of it follows Lewis and Clark’s path up the Missouri River, where you can ride beneath towering river bluffs while eagles circle overhead. After leaving the river, the trail meanders through peaceful farmland and small-town Americana.

The Katy Trail is flat and scenic and ideal for hiking, running, or cycling on just about any kind of bike. Experience railroad history all along the trail, through several preserved train cars, depots restored to their original splendor, and other vestiges of the railroading past that can be found along the trail. Visit the Katy FAQ page for more general trail information about the Katy Trail.

If you’re ready to experience the Missouri Katy Trail for yourself, please give us a call at 800-272-4141 or click here to learn more about our Katy Trail Bike Tour.